by Hilde Doting | In the course of this research , we will develop a new approach to the subject of marketing, branding, news and science.

Concerns back to the level of early March

The Netherlands is just as worried again as it was in March. Now that the infections are once again increasing rapidly, a record number of Dutch people consider the coronary measures to be too limited and need to be tightened up. At the same time, there is a great need for information, not only from the government, but also from brands. It is up to marketeers to respond to this challenge.

People's worries about corona have clearly increased in recent weeks. This is not surprising given the increasing number of infections and the tightened measures. For example, two thirds of Dutch people are now worried about the health of their loved ones, and almost half (47%) about their own health. In addition, not only the oldest, most vulnerable group is more worried about their health and personal financial situation. In all layers of the population, the concerns are back to the level they were at the beginning of March. 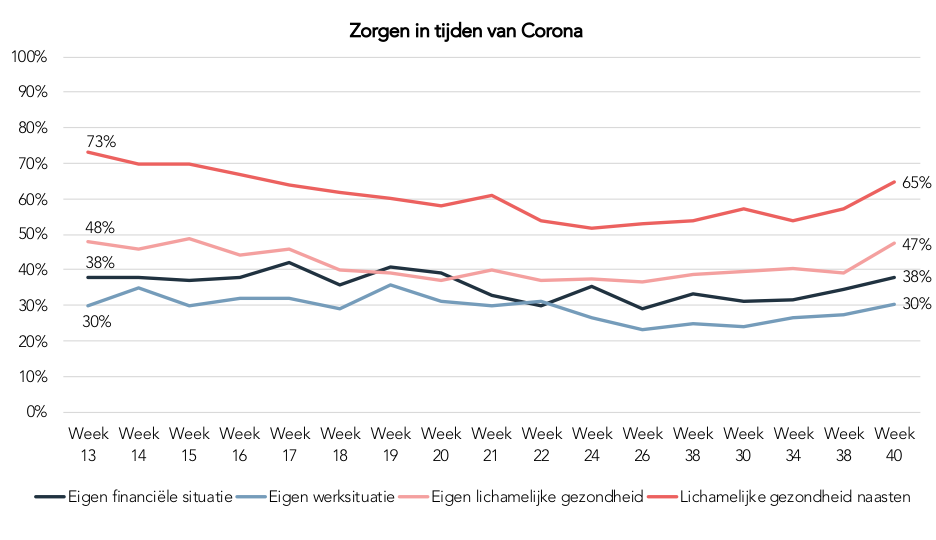 Martin Leeflang, CEO Validators: "Two weeks ago we already saw that a majority of the Dutch wanted stricter measures. That trend is now continuing. This also shows exactly the relevance of the Consumer Behaviour Monitor: we identify trends and changes in consumer behaviour at an early stage, so that companies and institutions can be close to the developments. Because we have been measuring since March, we see a very interesting trend over time. In the coming period, we will increase the frequency to a weekly measurement again, so that we can stay on top of it".

Also among young people the quarter seems to have fallen by now
When it comes to corona, young people are anything but positive in the news lately. RIVM boss Jaap van Dissel even blamed young people for the second wave, which they would have stirred up again in the Netherlands after party holidays in Southern Europe.

Despite the fact that young people - like the rest of society - are still hard hit by the various measures, the penny seems to fall on them now. Concerns about their own health and that of their loved ones are increasing. And although they are finding it increasingly difficult to cope with the limitations in social contact, they are less positive about attending social activities such as events, festivals and fairs than they were two weeks ago. Young people also say that they need to change their behaviour and comply better with the measures. Whereas two weeks ago the number of young people who stayed at the 1.5 meter distance decreased significantly (from 74% to 65%), the last week it increased again significantly (from 65% to 73%).

Great need for information: opportunity for brands
In line with increasing concerns and the need for stricter measures, the need for good information about the crisis is relatively great. A quarter of the population needs more information, which is in line with the situation we saw at the end of April. Although the government has a role to play in this, it also offers opportunities for brands. In recent months, consumers have been less interested in what brands had to say about corona. But now the number of people wanting to know how brands are doing their bit is increasing. Also, more and more people feel that brands need to adapt their communication back to the situation.

Gijs de Beus, strategist at Friends & Foes and member expert panel: "According to Byron Sharp brands shouldn't communicate about corona at all. I'd rather say: if you don't have anything to say, you don't, but of course you can if you can contribute something that comes from the core of what your brand stands for. But brands seem a bit coronamoe. During the first wave, many brands were still at the forefront to show that they were there for their customers, now attention is elsewhere. While it's clear that corona and its impact will continue to be felt by consumers".

Rob Revet, brand strategist at FNDMNTL and member of the expert panel: "Not only the higher need for news and information now makes advertising interesting. As worries increase, we also see the brand relevance increase again and the switching behaviour. This means that people seem to be more open to brand messages. Also of brands they didn't buy before. So advertising is important. Whether it's to gain market share or to defend".