Consumer Behaviour Monitor: how corona has been disrupting our consumption behaviour for the past year

At the beginning of 2021 we take stock of a small year of corona. A year in which corona made us worry more about others than ourselves. Confidence in the government was high at first, but fell sharply in the autumn. It is not yet clear what the impact of this will be on vaccination coverage. What is clear, however, is that there is still little movement in vaccination readiness. Although we are still struggling with the measures, there is also habituation. Also in consumption behaviour. Brands became more relevant, but when people were more concerned. Demand fell out in some sectors. In others, demand went sky high. But there is hope for 2021: many consumers still have something to spend, because people also had money left over.

It hardly seems imaginable anymore: a life without corona. A life in which we celebrated, went out to dinner, cuddled each other and shook hands, travelled and went out whenever we wanted. Yet it was only just a year ago. Two months in 2020 we enjoyed the carefree life, until the coronavirus brought fear, uncertainty and worry in March.

Most Dutch people had immediate concerns about a possible economic crisis. Although a possible recession remained a major concern throughout the year, these concerns diminished as the corona crisis continued. Moreover, a large majority of consumers have saved and saved money over the past year, making a crisis seem far away and abstract to many. This could be good news for the economy and the business community in 2021 - if we were allowed to go out again: many consumers have something to spend!

Besides a possible economic crisis, we were most concerned about the health of others in 2020. When COVID-19 reached our country in March, 70% of the Dutch were worried about the health of others, compared to less than 50% who were worried about themselves. Social beings as we are, we pay more attention to others than to ourselves. These health worries follow the waves of infection. They decreased until the beginning of the summer, but then increased rapidly as the number of infections increased rapidly after the summer.

From the second corona wave onwards, support for the government's approach has declined sharply. Until mid-2020, more than two-thirds of the Dutch population thought the government's approach was good and only 15% thought the measures were too limited. Since August and September, the group that found the measures too limited grew strongly to 29% in August and September and even to over 40% in October. The stricter measures introduced in October did moderate the negative consumers. In October, 25% did not have confidence in the government; now it is still 20%. The number of people who think the measures are too limited has also fallen to a third.

How will the current vaccination approach affect this attitude and confidence? So far, there has been little movement in consumers' willingness to be vaccinated. More than half are planning to be vaccinated, but 15% have been saying 'no' for a number of weeks and more than a quarter still don't know.

Gijs de Beus, strategist at Friends & Foes and member expert panel'.So far, the vaccination campaign has been mainly informative. Understandable, because people have quite a few questions about it, we see in the monitor. But now that the first people are being vaccinated, it is also important to emphasise that vaccination is the social norm. So it's a good thing that the vaccinations of coronary artifacts such as Diederik Gommers are widely reported in the press. Hopefully he'll get Famke Louise to do the same.'

However, habituation also seems to occur here, as fewer and fewer people are having a hard time with less access to the outside world. Also the fact that our news consumption assumes patterns that we were used to before corona, substantiates that 'we know it now'. In March last year, almost 6 out of 10 Dutch people used news channels more than before, now that number has halved.

Rob Revet, brand strategist at FNDMNTL and member of the expert panel: 'Corona gets used to it, it seems. The question is whether we also get used to our new behaviour. We now find it perfectly normal to order food online, but we can't do much else now. The question then is whether this will continue after corona and whether online ordering remains an attractive earning model for the hospitality industry. Many people can't wait to go offline again. That also became clear after the first lockdown.

Brands more relevant in times of crisis, opportunity for marketers

We won't soon forget how many people were hoarding when corona struck early last year. People rushed to the store and emptied the shelves. Especially toilet paper, pasta and canned vegetables became scarce. A quarter of the Dutch also spent more on food at that time. On average about €50 more per week. Nowadays, 15% of consumers still spend more on groceries than on corona. Not surprisingly, supermarkets achieved record sales last year.

Many brands found it difficult to assess how to communicate with consumers during this period. Many brands responded to corona with a commercial. But there was also the question whether people were waiting for this. There appeared to be enough support from consumers. However, messages such as 'we're doing it together' and 'we're here for you' quickly became a bit of a drag. Scientific analysis of the data from this monitor, in collaboration with the Free University of Amsterdam, also showed that this period offered opportunities for brands. As consumers become more concerned, brands become more important to them. Brands are then given a risk-reducing function. Data from this monitor showed that brands become more relevant in uncertain times. 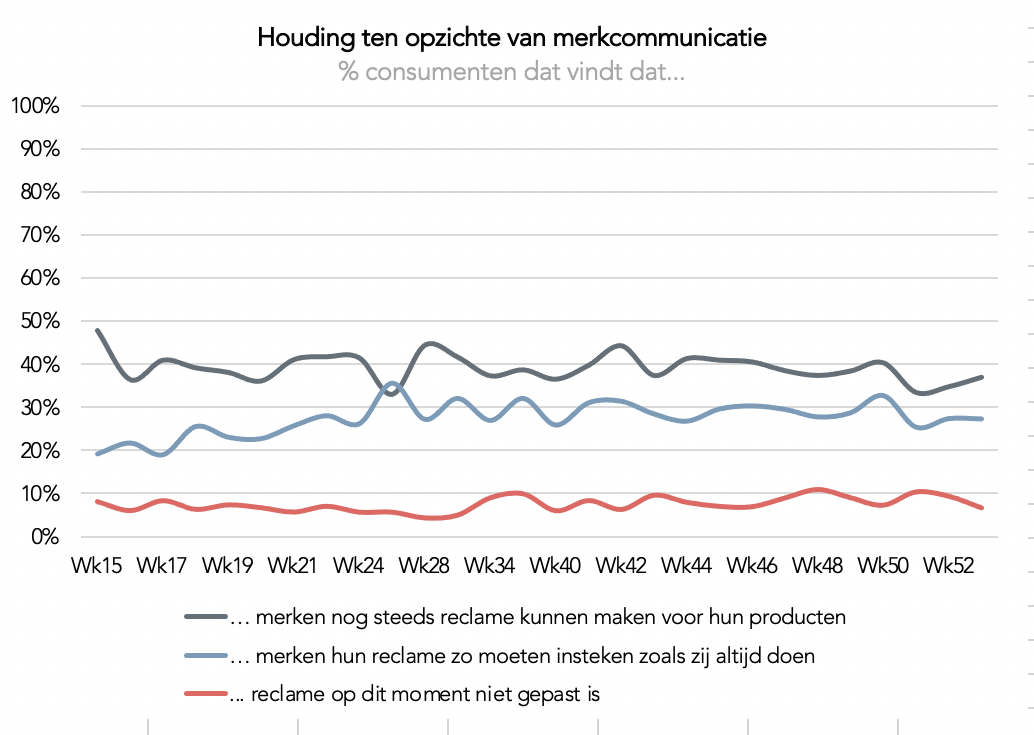 Mandy Merks, Insights Consultant at Validators and member expertpanel: 'Trust and safety and communicating remains important for brands. Moreover, we see a lot of support among consumers for advertising in the monitor, despite the crisis. But to really stand out from the crowd remains a big challenge. Authenticity of the message and good creation continue to play an important role in this.

This article also appeared on MarketingTribune.